A rose for secrecy (design history)

This is a ceiling rose: 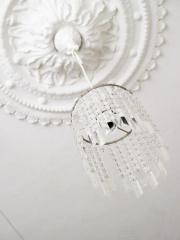 It’s now just an interior design accessory, used in many homes to beautify the ceiling and often cheaply made from materials like polystyrene. But the origin and early days of the ceiling rose are more interesting than you would think.

As far back as Roman times the rose was associated with secrecy. When the Romans withdrew from Britannia, the association of the flower with secrecy remained in the minds of the people. This at least appears to be the case, as in mediaeval England a rose would be suspended above a meeting table as a symbol of free speech and confidentiality.

In Tudor and Jacobite Britain, suspended roses were replaced by stylised roses constructed into the plaster of the ceiling above a meeting table. These were dangerous times, with charges of treason leading to execution, so confidentiality was key. The term sub rosa (literally ‘beneath the rose’) means ‘in secrecy’, so when a sub rosa meeting was called the attendees would go to the house where a ceiling rose existed and have their clandestine meeting.

The practical significance of the ceiling rose was lost over time, but the decorative element remained, with elaborate and finely crafted ceiling roses becoming particularly popular in Victorian England.